Abstract
Between 2022 and 2040, the remaining five coal-fired power stations in NSW are scheduled to close. The plan in the NSW Electricity Infrastructure Roadmap is to replace this lost generation with solar and wind in remote Renewable Energy Zones, but would Small Modular Reactors (SMRs) on retiring coal-fired power station sites be a better option?
Tony will examine the status of electricity supply in NSW and look at the nuclear option. Re-using the existing infrastructure makes the best use of the assets and reduces costs but, more importantly, retains jobs and keeps the local communities alive, facilitating a “Just Transition”. Tony will also answer the questions “What about safety?” and “What about the Radioactive Waste?”

Tony worked for British Energy in the UK for more than thirty years commissioning and operating 8 nuclear power reactors.

In 1999 he moved to Australia and joined ANSTO where he managed fuel strategies and provided advice on nuclear issues to the Federal Government. He was subsequently appointed as Commissioning Reactor Manager and then the first Reactor Manager of ANSTO’s new OPAL research reactor. Tony is now a Consultant. Tony is an Honorary Associate Professor and principal lecturer for Nuclear Reactors and the Nuclear Fuel Cycle at the ANU.

Tue Feb 22 , 2022
Erika Beck, a Mosman artist had donated her painting “Beauty Point Morning Light” to first prize winner of Mosman Rotary Christmas Raffle 2022. The first prize was won by Patricia Garcia, AO who also happens to be a Rotary Peace Fellow.  Erika visited the club and handed a  book that […] 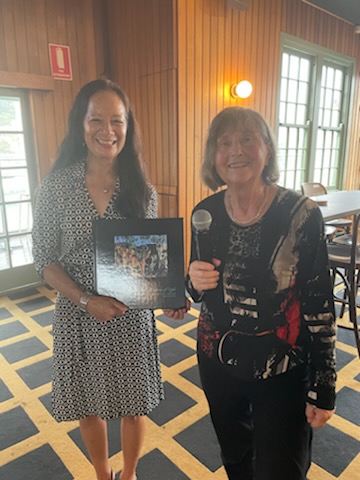