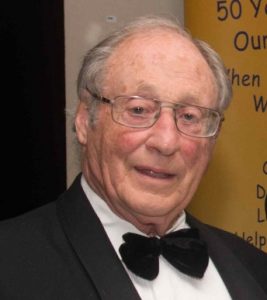 It is with great sorrow we record the death of our esteemed member Past President Ian Fitzpatrick, PHF who passed away peacefully on Tuesday 16 August surrounded by his extended family.

Ian, a well-respected local doctor, joined the Rotary Club of Mosman on 12 June 1978 with the classification of General Medical Practice and has been an active member ever since.

He joined the Board of the Club in 1978 as Youth Service Director and was a key link between the Rotary Club and Rotaract Club. In July 1980 Ian took on the position of Club President and his enthusiasm and dedication to role ensured the Club had an exciting and rewarding year of service. During his year, the Club was deeply involved in international exchanges with a Group Study Exchange representative in Brazil, a Youth Exchange Student in Japan and a Rotary Foundation Scholarship to Cambridge. The year also saw the successful launch of one of the Club’s most successful International Service Projects, building a Secondary School in Zimbabwe. The project was funded by an auction and market day at Mosman High School and much of the year had Rotarians out and about in Mosman collecting donated furniture and brick a bac for sale on the day.

Following his year of Presidency, Ian continued to be very involved in Club activities and there is no better example of this than his role as a member of the “No Drugs” task force which produced a drug education video “Out of Control” designed to strengthen the resolve of children between 10 and 14 years to say “No” to their first offer of drugs. This project, conducted jointly with the Rotary Club of Balmoral was funded at a cost of $130 000 and was honoured for outstanding community service in the 1989 Herald Service Club Awards.

For many years Ian’s home in Coronation Avenue became the hub of Rotary activity as he hosted numerous exchange students, underprivileged children from the Far West, indigenous medical students, Club Christmas parties, Melbourne Cup luncheons, Board meetings and Club Assemblies. On top of all this, throughout his time in the Club Ian was always on hand to sell raffle tickets, cook at Rotary Barbeques, promote the Rotary Bowelscan project and transport students to events such as MUNA, RYLA and RYPEN, .

Ian was an inspiration to us all, a devoted and much-loved family man, a well-respected family GP and a lifelong community volunteer. In recognition of his standing in the community the Rotary Club of Mosman honoured with a Paul Harris Fellowship with two Sapphire pins and Mosman Council named him Citizen of the Year in 2009.

A memorial service will be held at St Luke’s Church, Mosman
at 2pm Thursday 25th August

Wed Aug 24 , 2022
Dear Rotary Club of Mosman I was asked to give you a quick overview of what I have done since returning from my exchange in 2019/20. After returning back to Switzerland, I had another two years of school to complete in order to reach my Swiss HSC. I finished well […]